Welcome back from Christmas!  I hope you survived… my family and I did, but barely.  We did four Christmases in three days, put 464 miles behind us (unfortunately, not a record for the Hurricane family at Christmas time), survived four sick family members, and consumed unfathomable amounts of turkey.  We were happy to see everyone, but we’re equally happy (maybe a little more) to be back in our own home, in our own brand of madness.

Going back to my “spreading the love” project, I want to mention one of my closest friends.  We went to high school together, and now we live in the same town again.  She’s sort of like the sister I never had… we’ve got lots of really strange things in common.  I know I can always tell her exactly what’s on my mind and most of the time she’ll say, “Oh my gosh, I know, right?!”

So, dear friend, I want you to know that you are a little ray of perpetual sunshine in my life.  You always brighten any room you walk into with your cheer and your smile.  Even when your life gets turned upside down or things aren’t going your way, you always put on a brave face and cheer on everyone around you.  The world needs more people like you.  I truly admire you, and hope to be like you someday (if I can ever become less cynical and cranky).
Posted by Hurricane Jessie at 12:45 PM 1 comment:


Today, I want to send some love my brother’s way.  There’s something special about the bond between siblings; it’s different than friends or other family members.  I haven’t always been the best big sister (shocker!), and for that, I’m sorry.

We’ve had our share of knock-down-drag-out fights, but I don’t know any siblings that haven’t.  Remember when you pushed me face-first out of the pickup bed onto the concrete driveway?  I paid you back by knocking out your front tooth (on Christmas Eve, of course).  There were probably days when Mom had to be sure only one of her children was going to see twenty.  That woman is a saint for putting up with all our shenanigans.

Even though we’ve never been really close, there’s nobody I would rather have those memories with.  I don’t think I know anyone wittier than you.  As a child, you had the goofiest sense of humor, but as you mature, you’ve become so intelligent (and snarky).

I’ve been told I’m brave and I’ve been told I’m strong, but when I look at you, I know you’ve got me beat on that one.  Especially when we were younger.  You’ve never cared what people thought of you, and I really admire that.  I remember when I was in junior high, and I was upset over some typical junior high girl issue.  Dad sat me down and told me he wished I could be more like you, because you had such security in who you were.

I know you’ve had some rough patches, but it doesn’t tarnish the way I see you.  In my eyes, you’re still my little brother who beat me at anything related to academics (if I got an A, you got an A+; I was the salutatorian, you were the valedictorian).  You’ve got so much potential, and I know you’ll succeed at anything to attempt, because you always have.

Although we don’t see eye to eye on many social, political, and religious issues, I respect your opinions and value your input.  I’m not the best at showing it (I still won’t hug you if anyone else is looking), but I love you, and I’m so glad O gets to have you as his uncle.
Posted by Hurricane Jessie at 1:14 PM No comments:


A friend of mine and I were grabbing lunch and catching up today when we bumped into someone we both knew.  We said “hi” and exchanged pleasantries, and as she left, my friend and I began talking about what a great person she is and how much we both liked her.  I got to thinking, why do we do that?  Why can’t we tell the people we love how much we value their presence in our lives?  I think, among several other things, that is one area I’m going to try to strengthen in 2013… in fact, I’m so impatient, I’m not going to wait until then.  This is something I want to do better now.  Every day until the end of 2012, I’m going to share the love with some of the people I care about, but don't tell as often as I should.

Today, I want to thank my son’s wonderful day care mom: You are a beautiful person, inside and out!  I couldn’t imagine O spending his days with anyone else.  You share your home and your family with us every day, and I’m so grateful to have you in our lives.  No matter how chaotic life gets for us, I know O has a strong, stable environment to be in Monday through Friday from 8-5.  The morals and values you hold are in line with the values Tots and I are trying so hard to instill in O, and I appreciate knowing that our efforts extend beyond our own home.  You are a joy to work with, from your friendly smile first thing in the morning to the pictures you send me of O during the day, to your nightly rundown of his day when I pick him up.  THANK YOU for giving so much of yourself to my family, and all of the other families you serve.  You, your daughters, and your husband are a bigger part of our lives than you could possibly know.  Thank you also for being such a great acquaintance-turned-friend.  Your constant support of me and my endeavors is astounding to me.


I just wrote an entire page about the Sandy Hook tragedy.  I had to delete it… I couldn’t bring myself to post it.  In the past week I’ve cried more than I knew I could cry.  I’ve cried at work, I’ve cried in my car, I’ve cried at home.  My heart is so heavy for everyone involved.

This whole situation is ugly, and there is no quick fix for it.  Some believe the answer is gun control, some believe it is bringing God back into schools.  I’m not sure either of those things are the answer (just to clarify, I’m a gunless, devout Christian), but I am happy to see the conversation surfacing about increased access to mental health care, or possible options for getting people the assistance they need.

This article has been floating around for a while.  If you haven’t read it already, you need to go read I Am Adam Lanza’s Mother.  No matter where you stand, it’s bound to make you think.
Posted by Hurricane Jessie at 7:58 PM No comments:


I can’t believe I’m finally getting to this post about a week later.

Here are some more gift tag ideas.  These are all fairly easy; almost as easy as scribbling the name onto the package with a Sharpie.  Don't worry, we're not leaving your Sharpie behind completely... we're just upgrading him a little.

This is probably my favorite one, but it requires neat handwriting- a trait I never fully developed. 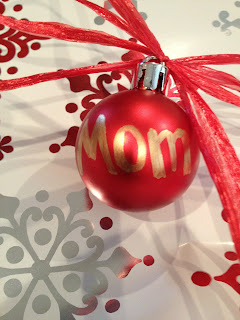 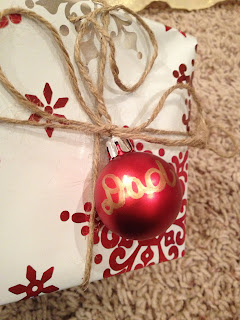 You can find these small ornaments relatively cheap, especially right now.  I think I got these red ones at Walmart.  I used a gold Sharpie paint pen, scribbled the name of the recipient as neatly as possible, and then threaded it onto my ribbon, or jute.

This clothespin one is really fun if you’re going for an understated rustic style.  You could also take it in another direction and make a cute reindeer! 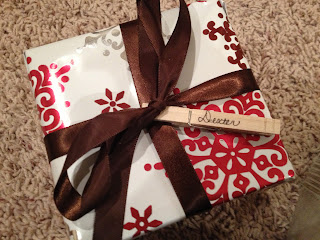 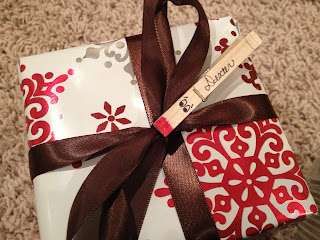 Here’s a new take on the standard, classic gift tag.  You could dress it up a little bit by layering another sheet of cardstock onto the red, or keep it simple. 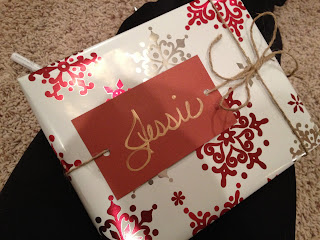