Back patio gets a facelift

Can you believe next week is the 4th of July? I'm hoping we can squeeze in some time at the water park or zoo before September gets here!

One of the reasons my summer fun keeps getting pushed aside is house projects. As you know, we're in the middle of trying to sell our house (and wow, I'm earning a gold star in the patience column... not! That's a different post, I suppose.), so home upgrades have sort of taken priority. In fact, we spent our first weekend of summer pouring some sweat into our back yard (figuratively, not literally, as the weather was anything but summer-y. We were freezing our butts off in the rain and wind, shivering in hoodies and gloves.)

You see, when we first moved in, our back patio was... well, it was okay. Nothing amazing by any means. It was small and it was not the way we would have done it. I won't go into my rant about it, but we'll just say it was on our list of things to fix (along with finishing our basement, painting upstairs, planting and landscaping out front, adding a fence to the backyard... the list goes on and on).

Because we weren't in love with it, and because he knew we were going to change it, and because he's pretty awesome like that, my dad put up a small pen for Dex right after I brought O home from the hospital. He knew that I wasn't going to have the time/energy/patience to chase Dex in and out of the house every time he needed to go outside, so he created what lovingly became known as Dex's "shit-pen" around the bottom of our deck so it would be as convenient as opening and closing the door. Of course, you can imagine what happened... it didn't take long for Dex's little pen to become a little (a lot) unsightly. 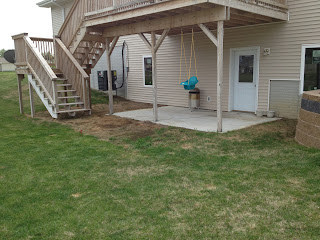 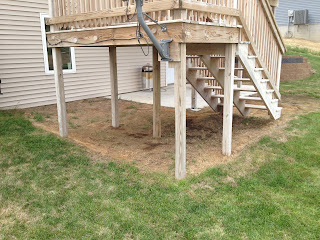 Yep, pretty ugly. Again, in our defense, we knew this would happen, and we sort of intentionally let it happen. Who wants to mow grass under stairs?

We knew we had wanted to extend our patio so that the steps came down to concrete and so we wouldn't have to maintain a lawn under the landing and stairs, so this wasn't really a big deal until we decided to put our house on the market.

Of course, as soon as we decided we wanted to list our house, we wanted it done like, yesterday. So, we enlisted the help of (who else?) my dad, the master-planner/builder/craftsman, and my mom, Grandma and babysitter extraordinaire. In the matter of a couple of days (and hours of digging, leveling, wheeling concrete across the yard from the truck), we had this: 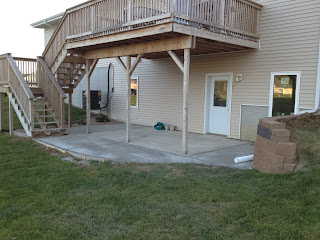 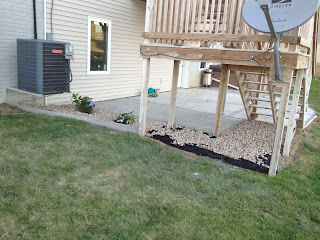 (Of course, in true Jessie-style, we underestimated the amount of rock we would need, so we were a little short for a while. I was too impatient to wait for more rock to get a picture after all our hard work. Don't worry, it's much better now.) 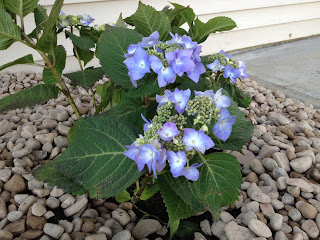 After living in our house for two and a half years, we've finally got the patio we wanted. Because we did all of the work ourselves, it only cost us around $400, by the time we purchased the rest of the rock and the plants we wanted.

Sure, it's nothing amazing, but we really do love it. I've already used the back patio more in the last month than I did all last summer. The moral of my post is that you shouldn't wait until your selling your house to make it amazing... unless you're like me and you need a fire lit under your ass :)

As promised, I'm going to begin sharing some of the projects that are keeping me busy during nap time, night time, and weekends. My goal is to share one project a week... however, it may not always be a completed project, sometimes it might be a work in progress. I would love to be able to complete one project a week, but unfortunately (even with my new part-time work schedule) there just isn't enough nap time for that kind of progress.

This project is one I had been excited about for a while; even before we decided to sell our house. When I was in my early teens, my parents bought me this cute little vanity for my bedroom. I'm not sure which birthday it was for, but I know it was before I could drive, and probably right when I started to get into hair and makeup. I'm assuming this was purchased to alleviate the issue of bathroom time between me and my brother as we would get ready for school.

Anyway, once I went to college, this vanity just sat, abandoned, in my room. It did serve as a make-shift desk in a cracker-jack college apartment for a brief time, but when Tots and I moved in together, it got packed away again.

I'm not sure what sparked my excitement for this project, but right before we decided to sell our house, I got the strongest urge to get this vanity out and re-fresh it. I began to dream of clean, shiny white lines, and a cute patterned cushion. When I randomly stumbled upon the perfect fabric, I knew it was fate. 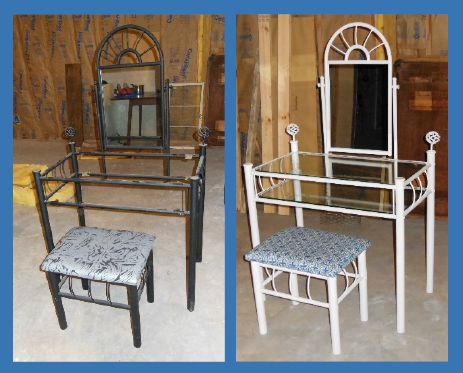 Hopefully this is obvious, but the picture on the left is the before. I just wasn't feeling the silver tiger patterned cushion anymore :).

What do you think? I'm pretty happy with how it turned out. This is one of the more simple projects I've done recently, but I think it's a good example of how high impact a can (or 4) of spray paint and a yard of fabric can be.

Obviously, I don't have a little girl of my own, and my bedroom is much too small to fit this extra piece of furniture, so now that it's finished, I will be selling it. I'm sad to see it go, but in the name of moving, it's time to cut the emotional ties and downsize!
Posted by Hurricane Jessie at 7:09 PM No comments:

It’s unbelievable to me that June is already half gone.  It’s been at least two weeks since I’ve posted anything, and I don’t even have the nagging, guilty feeling I usually get if I go longer than a week without updating.  That tells me that this time has flown by at a pace I’m almost unaware of.

I didn’t post a whole lot about my 5k progress.  Don’t worry.  I’m still training, and still hating almost every minute of it (with the exception of the walking breaks).  I did have to take last week off due to a minor back/neck issue, but I’m back at it again this week.  On that note, does anyone else ever get a stabbing pain between their neck and shoulder on the right side?  It’s almost like someone or something is pinching me really hard on a pressure point.

According to my resolutions, June is supposed to be the month that I make my house feel a little more like “us.”  However, we’ve actually made the decision to put our house on the market and move to the town where Tots works (he commutes about 40 minutes each morning and evening).  We didn’t see this coming in January, but it’s where we’re at now.  If you’ve never bought or sold a house before (this is a first for us in the selling department), let me tell you that it’s an all-consuming process.  In fact, anybody who knows me or has had to be around me for the last month can probably attest to this.  So, that means you’re going to get to read about all of the projects we’ve worked on to get the house ready to sell, instead.  Deal?

This also means I've got a fire lit under me, and that I need to finish all of my half-started projects in the garage (and basement, and spare bedroom, and closet...).  I'll be posting those, too.  I've already got a couple stockpiled, I just have to get around to taking pictures.

I’m a little disappointed to not be doing the home projects I had initially planned, but I hope you’ll find these valuable too.
Posted by Hurricane Jessie at 7:12 PM No comments: